Mike and Chris were well prepared for the journey they were about to embark upon to become parents when they took the first step with RADfertility. The internet served as their resource for information about the fertility process. “We already had a surrogate, Chris’s cousin, Susan. And as a gay couple, we knew we needed an egg donor,” Mike shared. Susan stepped forward to help the couple and provide this invaluable gift serving as their gestational carrier. She was married and had two healthy daughters from prior pregnancies in addition to a husband that was very supportive of her decision.

Now, with information at hand and a gestational carrier lined up, Mike and Chris were ready to find the fertility center that was right for them. In March 2014, they did a Google search looking for offices around ChristianaCare Christiana Hospital, which would be convenient for both Susan and them. “RADfertility came up in our search so we visited the website and submitted a contact form online.”

‘Looking Back, Our First Appointment Was Definitely The Easiest Part.’

Mike and Chris visited RADfertility’s Newark office for their first appointment in May 2014.  “Our initial appointment went well, we met with our doctor and Amy Miller. Our doctor described RADfertility’s PreciousEggs program and explained the process further,” Mike said. She guided Mike and Chris with the next important step on their journey which was picking an egg donor. “Our doctor explained the benefits of using frozen and fresh donor eggs.”

The flexibility of using frozen donor eggs struck a chord with Mike and Chris since it eliminated the need to synchronize the cycle of the egg recipient to the egg donor. “Susan was in nursing school and we knew we would ideally like to deliver in the summer of 2015 when she did not have classes.” Their doctor also recommended a lawyer to guide the couple through the legal side of the gestational carrier process.  “We were very happy with RADfertility’s recommendations,” Mike stated.

As a follow-up to their first appointment, Amy Miller, RADfertility’s IVF Coordinator, connected Mike and Chris with the donor database and served as a guide with the donor egg selection process. “All of the donor testing and genetic screening was complete,” Mike shared. This is when the couple realized another benefit of using frozen donor eggs. The six to nine month matching process was eliminated since the testing was already completed.

“Chris was nice enough to offer we try having a child with my embryos first, and then with his embryos on a subsequent pregnancy if we decide to have more children in the future. This way, our intended children could at least be biologically half siblings.”

They searched the diverse database of egg donors. Mike explained, “We knew we were looking for characteristics and traits that were similar to Chris.” The plan was to purchase two lots of eggs which represented a total of twelve frozen donor eggs. The couple chose to inseminate six eggs with Mike’s sperm and six eggs with Chris’s sperm. “Chris was nice enough to offer we try having a child with my embryos first, and then with his embryos on a subsequent pregnancy if we decide to have more children in the future. This way, our intended children could at least be biologically half siblings,” Mike shared. They had success finding a donor quickly.

With a donor selected, Mike and Chris were another step closer to achieving their dream of parenthood. As part of the process, a meeting with a psychologist was one of the required next steps. In July 2014, Mike and Chris joined Susan and her husband for a group appointment with Dr. Andrea Braverman. The counseling portion is very important because it ensures the gestational carrier is prepared for the process and represents an ideal time to discuss any feelings or concerns about the upcoming journey. 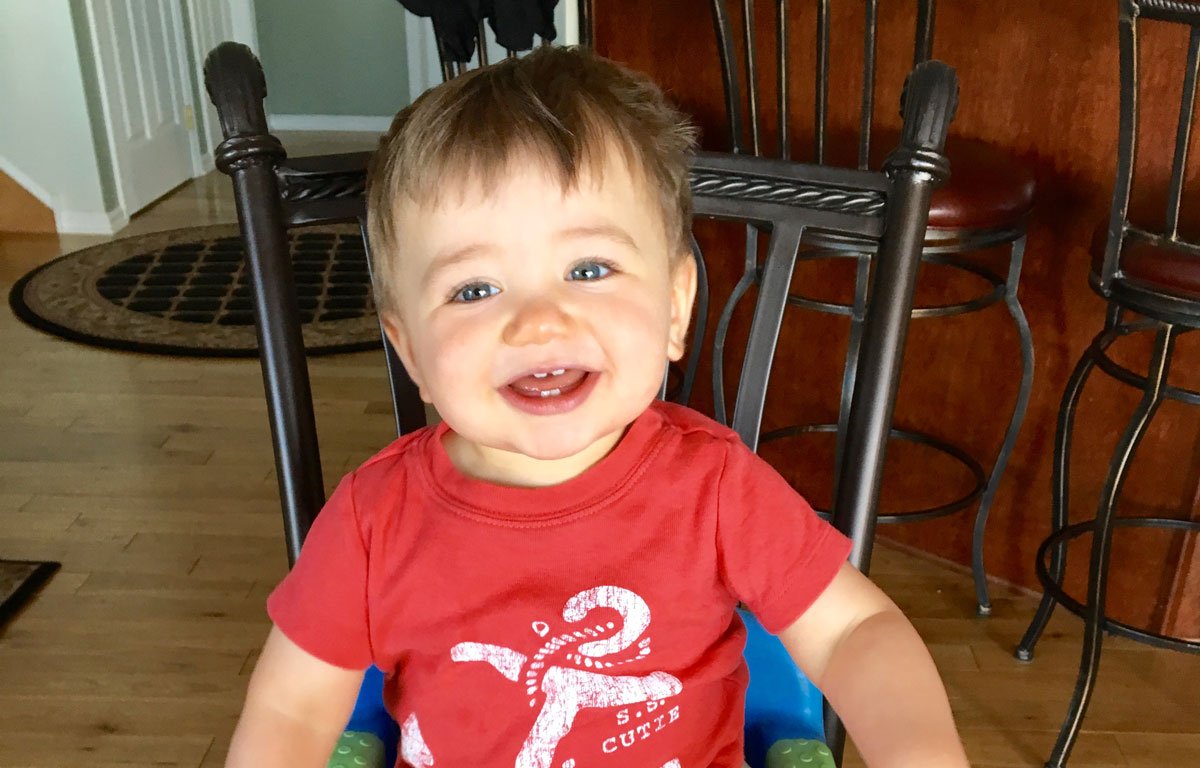 The Two Week Wait and a Dream Realized

With all of the paperwork and beginning steps completed, Mike and Chris were excited about Susan’s frozen embryo transfer in November 2014. “It was relatively easy for us – we felt bad that Susan had to go through the shots,” Mike shared. Following the embryo transfer, the couple encountered what they called one of the hardest parts of their family building journey, the two-week wait. They anxiously awaited an answer about the results of the transfer and good news arrived. “We were so thankful we had success after the first embryo transfer,” Mike shared with joy.

Susan was monitored at RADfertility weekly throughout the first twelve weeks. “They were very flexible with Susan’s schedule and we were able to attend most of the ultrasound appointments with Susan when our schedules allowed,” Mike noted. After twelve weeks, Susan, Mike and Chris were officially RAD grads and transitioned to their ob/gyn for their remainder of care. That special day arrived on August 11, 2015, when a little boy named Evan made his debut into the world.

“Thanks to RADfertility, and our gestational carriers, we now have two wonderful children. We are particularly grateful to Amy Miller, and also to the staff at RADfertility, that helped make our dream of having a family come true.”

Reflecting on their experience, Mike shared an important thing to remember while going through the fertility care process. “Be patient, it can take a long time. RADfertility is an excellent clinic and we clearly had success.”

Mike and Chris returned to RADfertility in 2017 to continue to build their family. With the help of a new gestational carrier, they welcomed Aurelia Kristine on November 23, 2018, making their family complete. 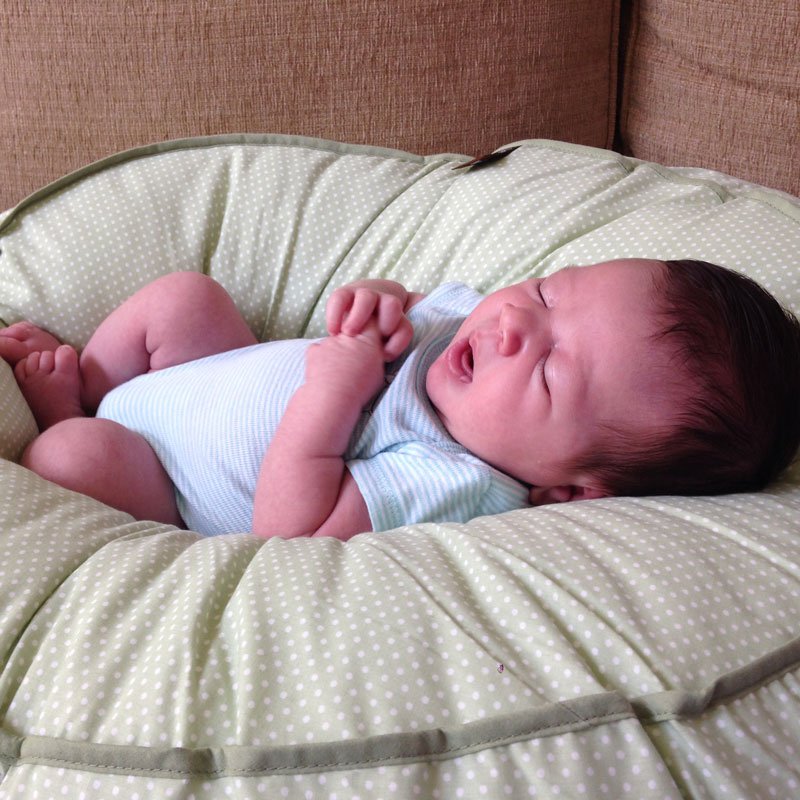 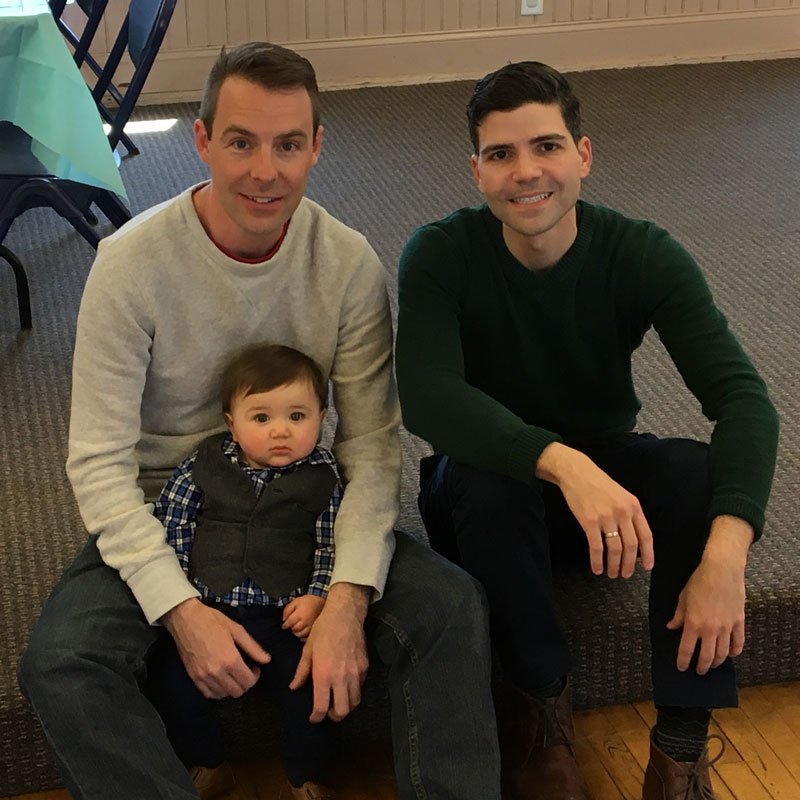 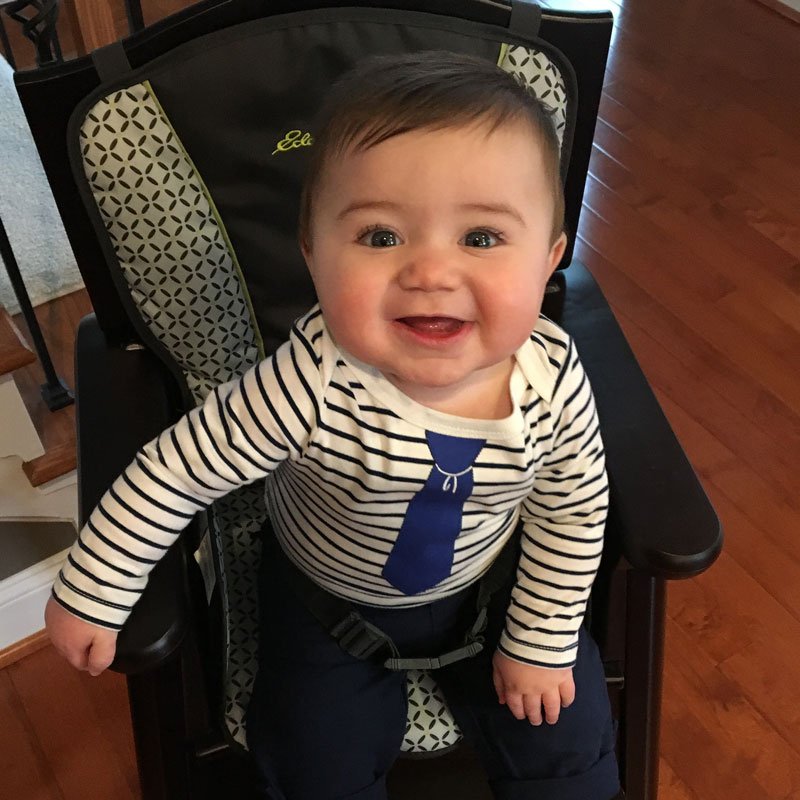 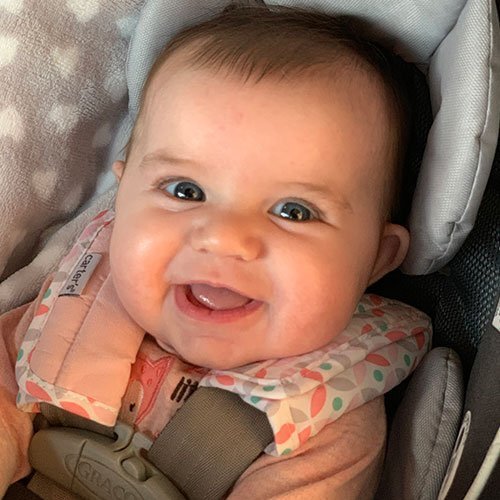 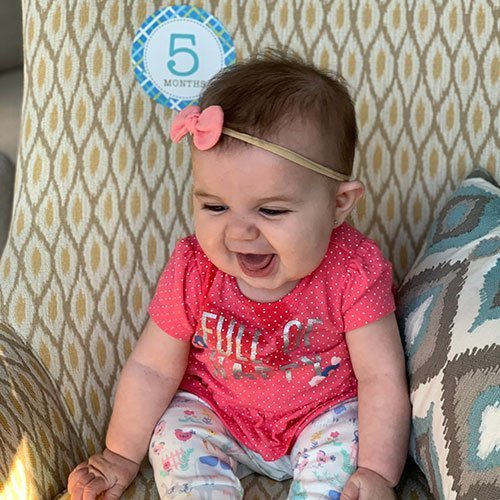 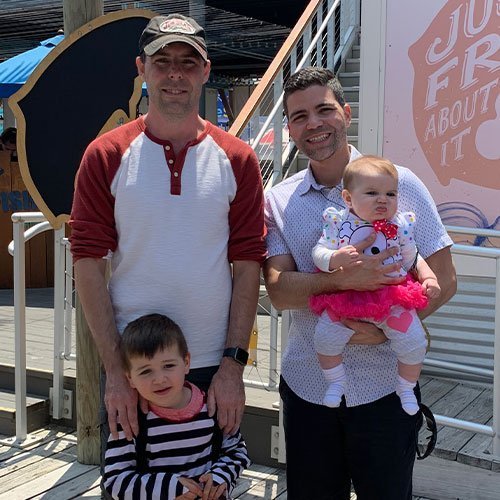 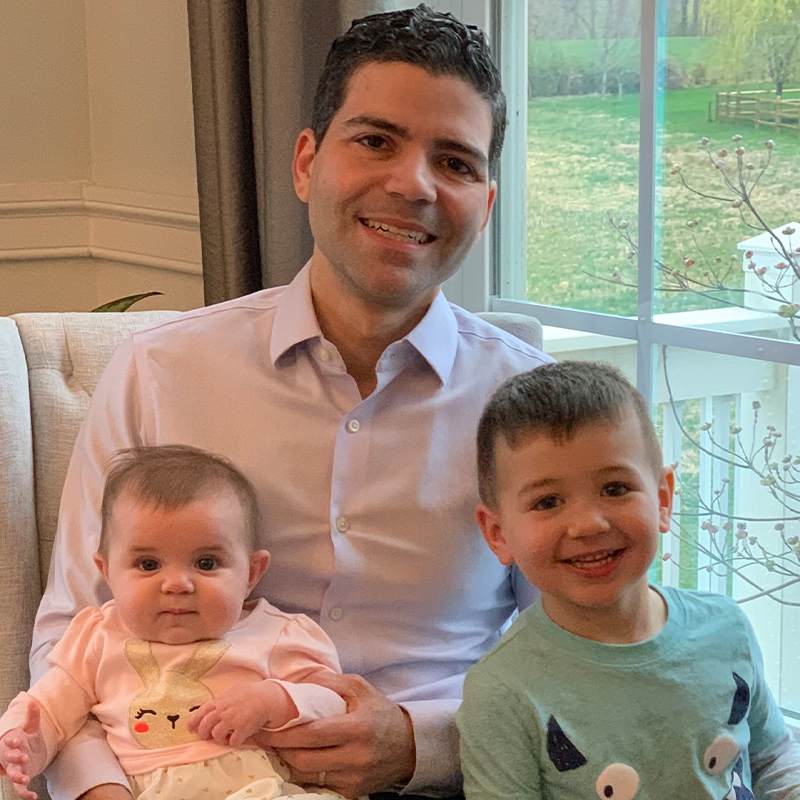 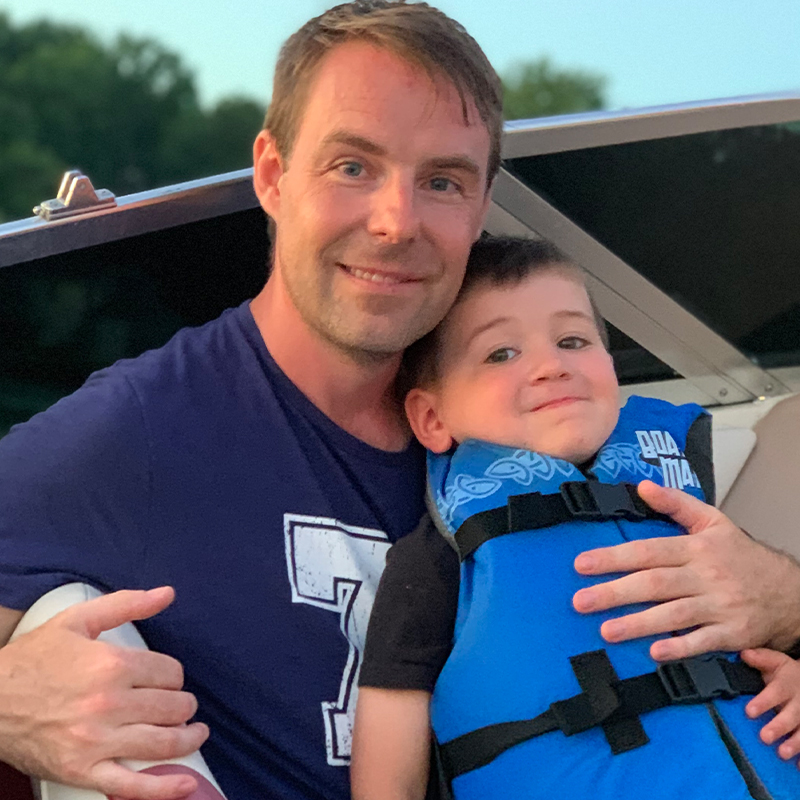 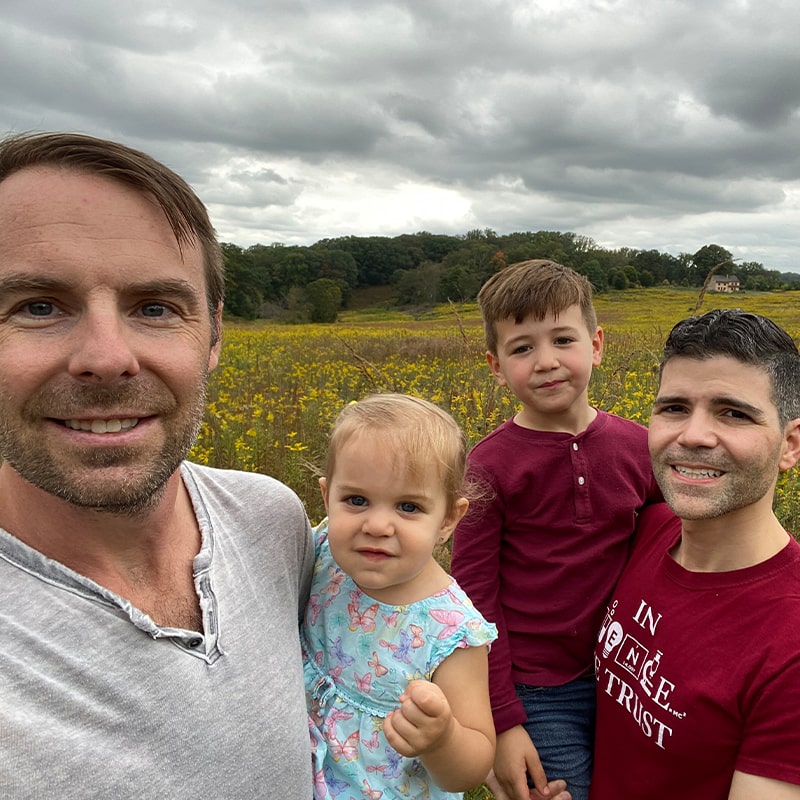 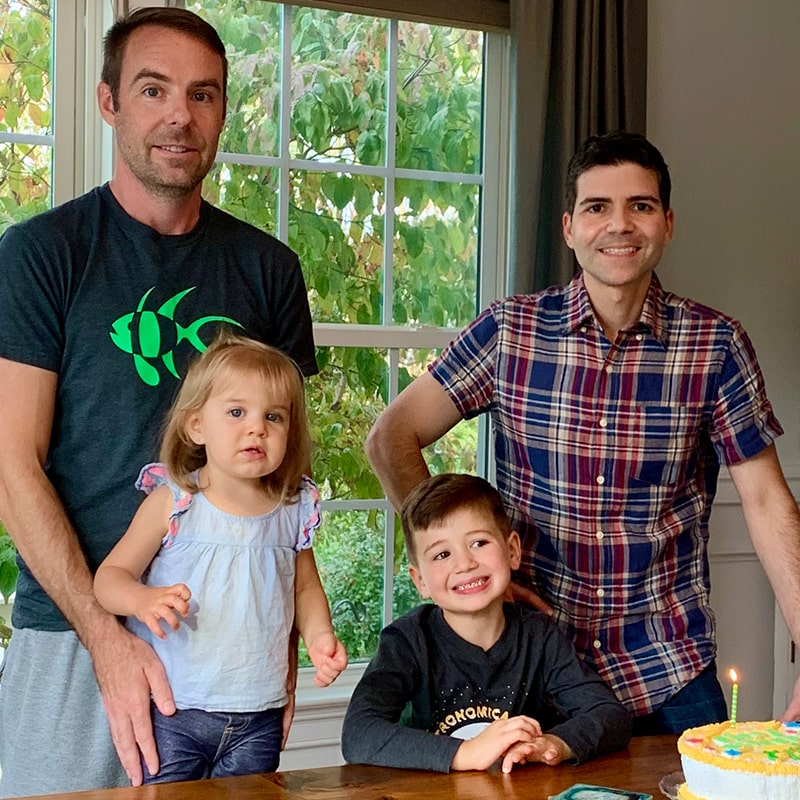 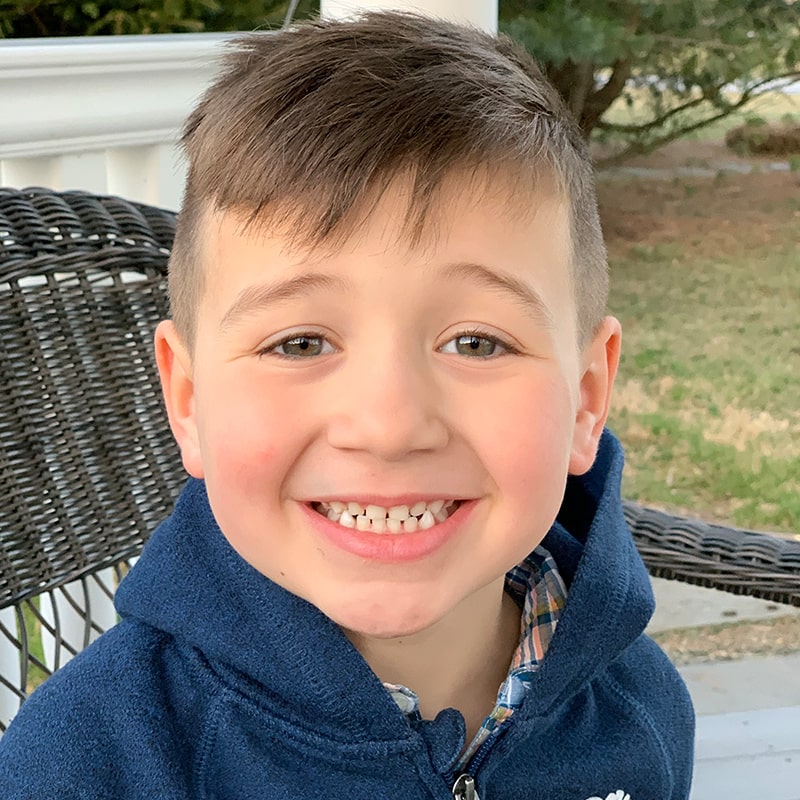 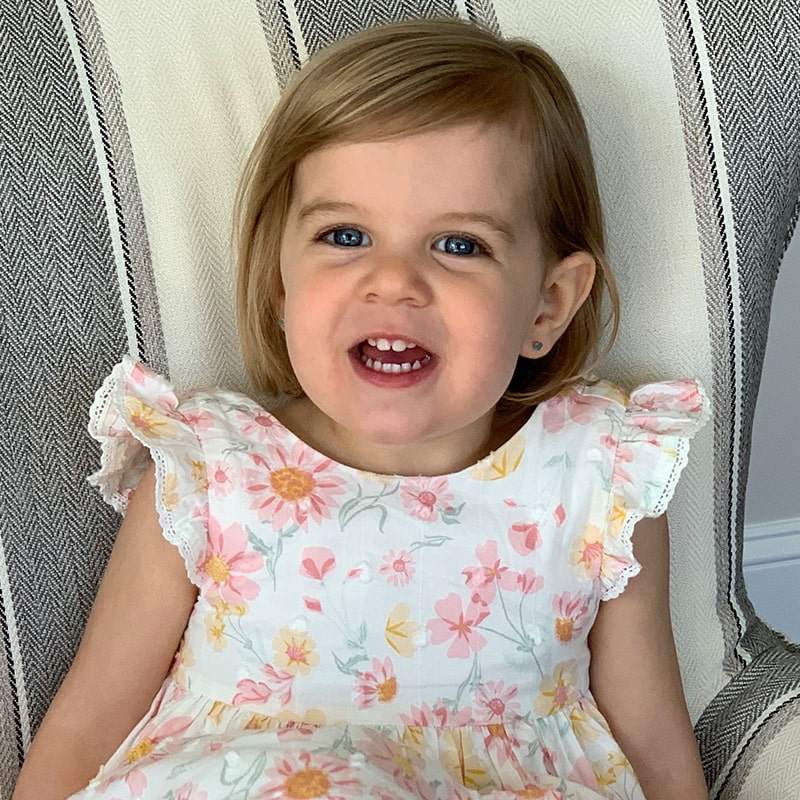